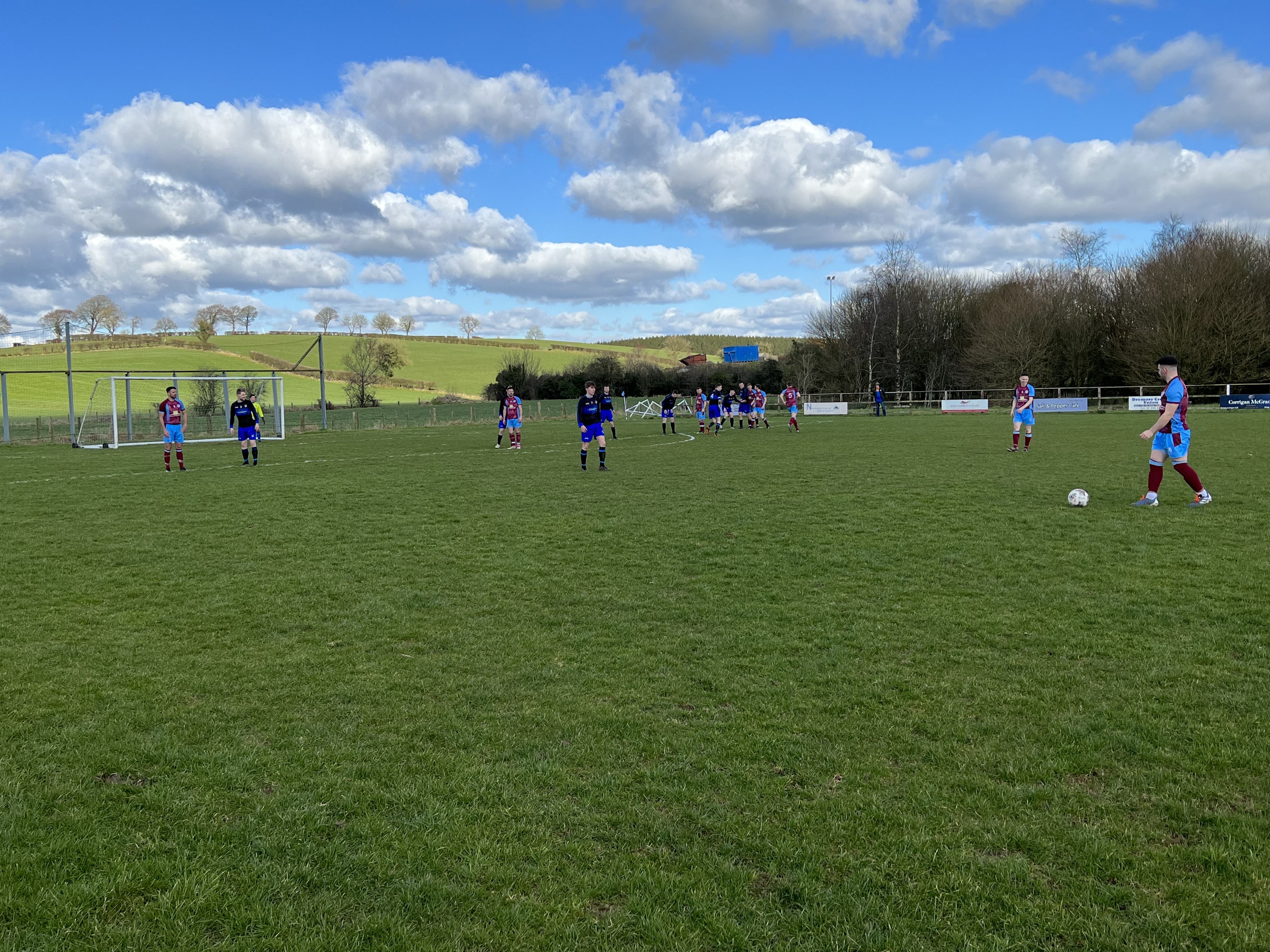 Tummery returned to league action this week looking to bounce back after last weeks exit from the Irish junior cup, there opponents Omagh Hospitals whom would surely be looking three precious points in there fight against relegation.

On a day perfect for football in march sunshine Ryan made several changes to the starting 11 with Matty Callaghan returning to the engine room and ruairi sludden in from the start this week. The crawfords lane surface didn’t allow for free flowing football as the weather over the last few months has taken its toal on it with bobbles all over the park.

Matthew Gilchrist was the man in the middle in charge of proceedings and he got the action underway. Tummery came flying out of the blocks and had hossies pressed firmly back in to there own half for the opening 15 minutes with hossies sitting with every man behind the ball bar one. On 7 minutes Paul McHugh evaded several tackles on a marauding run in to the box and shot was blocked with it falling to Marty Hughes at the back post an couldn’t get his feet sorted out in time an the ball went wide. On 8 minutes Marty had another chance with a header that he got on target but was a rather easy save for keeper McNamee, ruairi sludden maybe was better placed behind Marty.

On 18 minutes hossies keeper had to leave the field after sustaining a nasty facial injury after he caught a trailing boot from Aaron McNulty, mcnamee bravely sprawling himself at Aaron’s feet taking the blunt of it to his face.


On 27 minutes the deadlock was broke an tummery had the goal an in the balance of play they deserved to be at least one in front, great link up play with the front two, ruairi sludden put the ball on a plate for paul McHugh who opened his body and placed the ball in the right hand corner past the stand in keeper Browne.


On 30 minutes tummery doubled there advantage when Aaron McNulty was the man in the right place at the right time applying the finish to the net after a goal mouth scramble. Tummery pressed for another goal before the half time whistle but couldn’t find the appropriate final ball on the tricky surface. Whistler Gilchrist played the additional time lost to the injury and blew the whistle with tummery 2 to the good.

The only notable chance of the second half for hossies was when the ball broke to McCullagh in the tummery box when ciaran beacom slipped and his shot was blocked behind for a corner he really should have done better.

Tummery finished out the half and took the three points on offer as the march sun slipped behind the clouds to leave it a lot cooler at crawfords lane. A step closer to closing the gap to leaders Dergview but many more games to go.

Thanks to hossies for a good sporting well fought game today an wish them all the best for the rest of the season and all at tummery wish for a speedy recovery for netminder McNamee after his nasty injury today.

Thanks to all the tummery faithful coming out in big numbers today and cheering on Ryan and the lads.

Our reserves were in cup action today in the reihill cup beating omagh hospitals reserves on a score line of 5-1 at youth sport omagh.