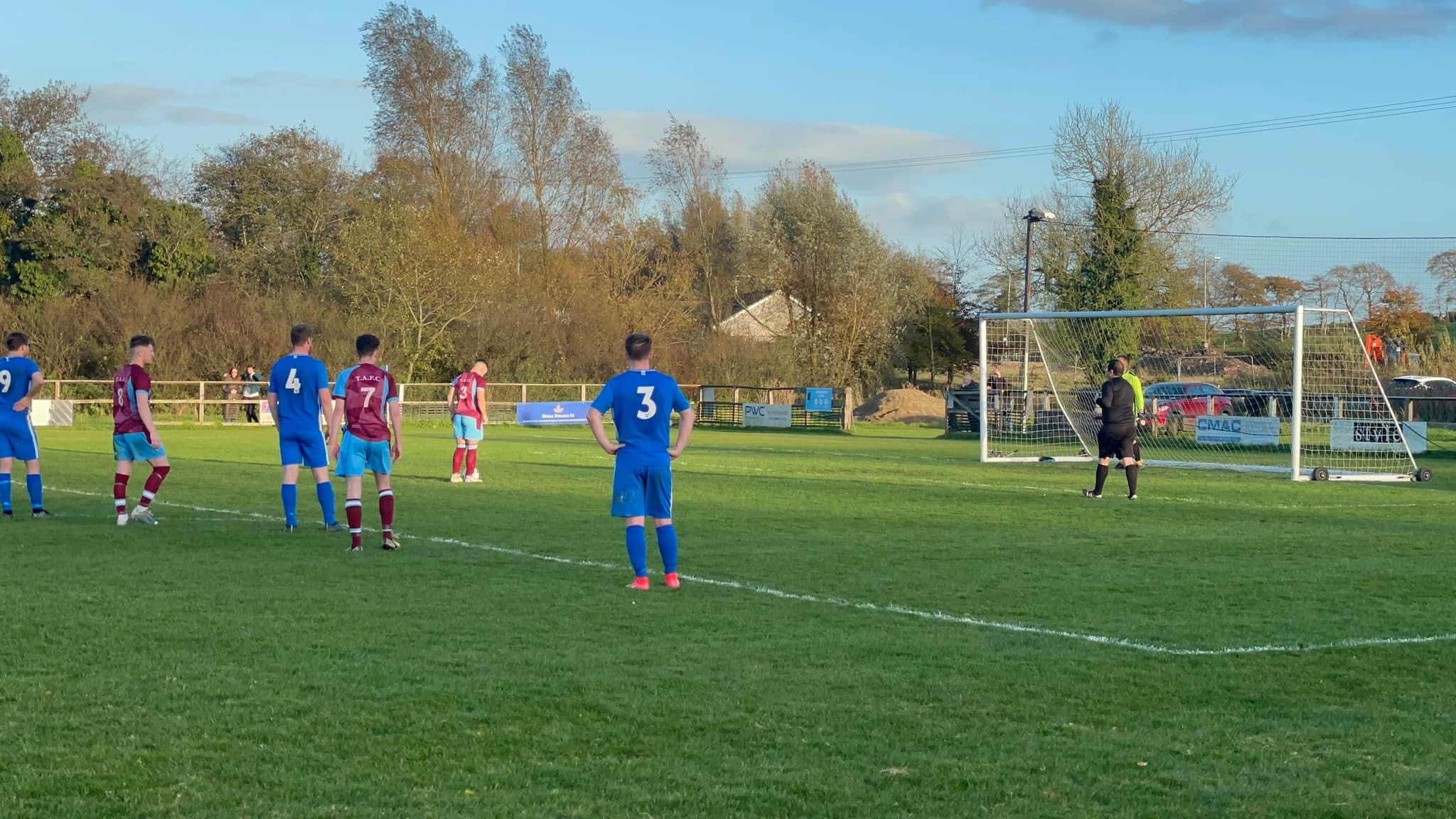 Tummery welcomed mountjoy united to crawfords lane today in a mercer league clash. Ryan named a few changes to the starting 11 this week due to injury and sickness. Declan McNulty slotting in to left back in the absence of Tommy Mullan and Adrian McCaffrey coming back in after suspension, Pearse mcnabb back in starting 11, and Paudi Dillon back after illness . Crawfords lane surface was in pristine condition no need for a pitch inspection this week as Kevin taggart got proceedings underway.

The first ten minutes of the game was all tummery bossing possession with mountjoy sitting in a low block with 10 players behind the ball. There was no clear cut chances for all the claret and blue dominance. On 11 minutes Brian Campbell (Ogie) went close with a looped effort which just went narrowly over stand in keeper David gilfillans crossbar. On 19 minutes the deadlock was broken when Kevin McAleer crossed the ball picking out Martin Hughes who expertly controlled it on his chest teeing up McCaffrey who hit it first time in to the bottom corner of the net a great team goal. On 25 minutes Martin Hughes had a chance to double the advantage, the ball grasped by gilfillan in the mountjoy net. 31 minutes Ryan Hanna had a chance but went wide with the keeper well an truly beat. On 41 minutes Ryan Hanna was contentiously blew offside with a great ball over the top picking him out.

The first half was tummery relentless in an out of possession against a mountjoy wall trying to break it down but the half time whistle was blew with the minimum between the teams.

Ryan addressed the lads at half time enforcing the message that the next goal was crucial in this tie.

Tummery took time in starting the second half affording a half chance to mountjoy on the 48th minute when William Donaghy hit the side netting. On 55 minutes Ogie had a goal bound effort saved by the inspired mountjoy keeper at full stretch down to his right tipping it around the post. On 56 minutes the gaffer Ryan Hanna played a pinpoint pass across the 18 yard box picking out Paudi Dillon who finished smartly past Gilfillan to double the advantage. On 61 minutes it was tummery 3 to the good when Martin Hughes dinked the ball over the on rushing Gilfillan goal bound only to be clawed off the line by a covering Gallagher with his hand, referee taggart pointed to the spot and brandished the red card to the defender. Upstepped the reliable McNulty who dispatched the ball to the net from 12 yards.

Tummery were relentless all over the pitch forcing mountjoy in to mistakes and hounding them every time they got possession. On 64 minutes Kyle McCrory replaced Paudi Dillon and was straight in on the action burning the centre half and whipping a bullet cross across the box that really should of been in the net what a cross it was. The tummery lads were playing some nice football but there was to be no more goals in this game with Niall McCrory keeping a clean sheet. Eimhin Cunningham replaced the gaffer and Mickey Logue replaced Kevin McAleer for the last 5 minutes as tummery left with all three points.

Thanks to mountjoy for a good well fought contest an wish them all the best for the rest of the season. And to Kevin taggart for overseeing proceedings.

To all our fans for making the journey an cheering on the lads to the end. 👏🏻🇱🇻

Our reserves were on the road today with Gary lynch and cathal McArdle returning to the starting 11 and left the bridge with all 3 points. The goals coming from cathal McArdle, Aidan Colton, and Mickey Williamson. Well done lads let’s keep this run going 🇱🇻🇱🇻